We are pleased to invite you to the first edition of our festival dedicated to gypsy jazz "Samois sur Suisse".

For the record, the town of Samois sur Seine (near Fontainebleau) hosted the Django Reinhardt international jazz festival from 1983 to 2015. A real crossroads and meeting place for all lovers of gypsy swing, the festival is also the occasion for many wild jam sessions, whether on the luthiers' stands or in the campsites until early morning...

It is this atmosphere that the Auberge des Vergers team will try to recreate and for this we have concocted a rich programme of concerts and masterclasses.

Born in 1981, guitarist, cellist, composer, arranger and painter, Sébastien Giniaux is today one of the leading musicians of the French jazz guitar scene, internationally recognized as one of the great interpreters of the gypsy jazz style.
Sébastien began playing the cello at the age of six at the Bourg-la-Reine Conservatory, then continued his classical music studies at the Boulogne and Aubervilliers-la Courneuve Conservatories.
At the age of eighteen, he took up the guitar and taught himself the instrument. His first influence was the music of Django Reinhardt, to which he soon added the more contemporary currents of jazz, Balkan music, West African music, improvised music, etc.
In 2015 he founded the duo "African Variations" with the Malian kora player Cherif Soumano and is also the leader of groups such as the quartet "D'ici-Danses" (compositions, contemporary jazz from here and elsewhere, album planned for 2020), the duo "Mélodie des Choses" with the guitarist Joris Viquesnel, the Balkan Project (variable geometry group, Balkan music and jazz). He accompanies the singer Paloma Pradal in a duet, and participates in many shows as a musician (concerts, recordings, theatre, dance).
Sébastien is also a member of Richard Galliano's trio with Diego Imbert on double bass, of violinist Mathias Lévy's trio with Jean-Philippe Viret, and is one of the soloists of the gypsy jazz collective "Selmer 607".
Composer and arranger for the singer Norig, he was also a member of the famous gypsy group "Taraf de Haïdouks" for five years (Maskarada record on Crammed Discs).
He is also a painter (exhibition "Vie Moderne" of thirty-five paintings at Frémeaux et associés in September 2014) and tries to understand the different artistic practices in the sense of meeting, dialogue and poetry.
Sébastien can be found on some thirty records, on guitar or cello, as a performer or composer/arranger, and has been heard on stage alongside Biréli Lagrène, Didier Lockwood, Angelo Debarre, Anne Sila, Maxime Zampieri, Taraf de Haidouks, Naissam Jalal, Toumani Diabaté, Cyrille Aimée, Stochelo Rosenberg, Guillaume Galienne, Michel Fau, etc. 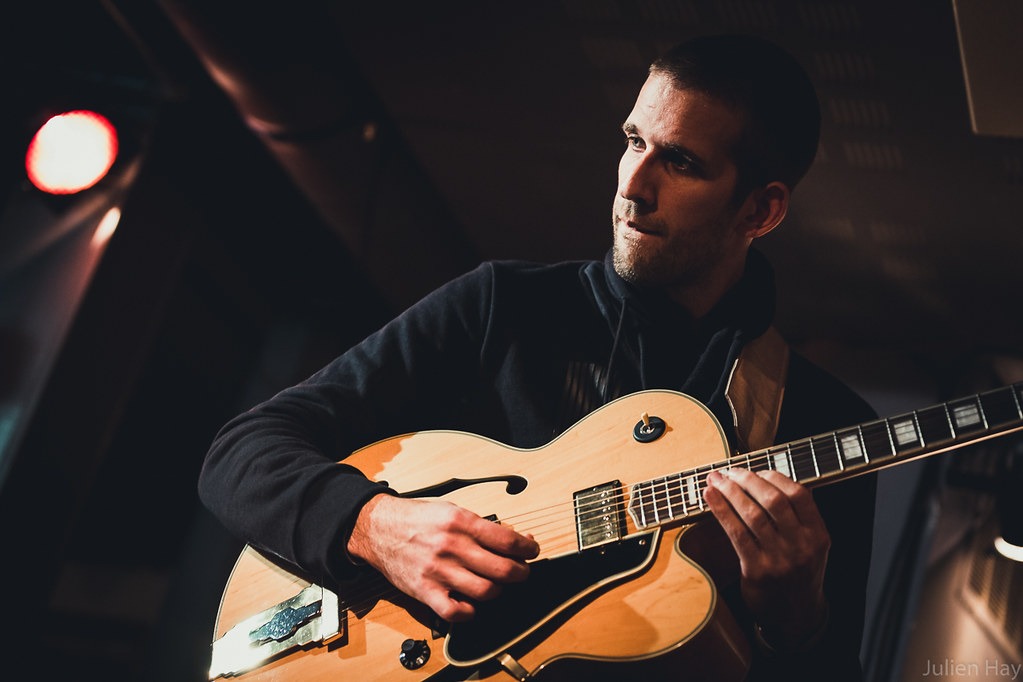